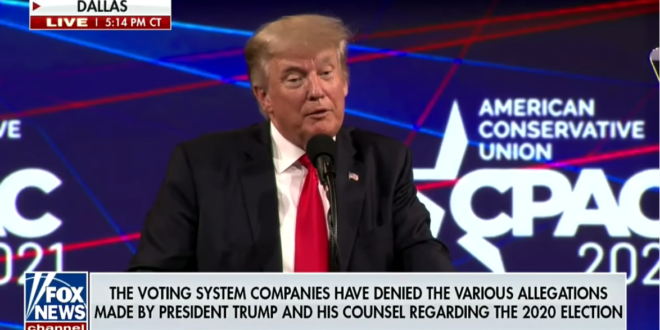 Fox News aired a legal disclaimer over former President Donald Trump’s speech at the Conservative Political Action Conference Sunday night. The message appeared on the chyron after Trump continued to push the lie that the 2020 presidential election had been stolen from him.

Trump said the election had been “rigged” against him and there’s “so much evidence” pointing to this. “It’s a disgrace to our nation, and we are truly being scorned and disrespected all over the world,” Trump said.

The disclaimer appeared as Fox News is being sued by two voting-technology companies, Dominion Voting and Smartmatic, who alleged that the network amplified Trump’s false election claims.