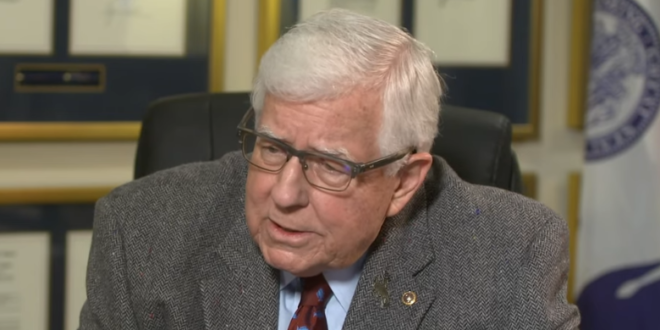 Former Sen. Mike Enzi died Monday after suffering serious injuries in a recent bike accident. He was 77. The announcement of Enzi’s passing came in a tweet posted at 11:14 p.m. to his senatorial Twitter account.

The Gillette News Record reported that Enzi was biking near his home in Gillette shortly before 8:30 p.m. Friday when he crashed his bike. No other vehicles were involved, according to a family spokesman.

Enzi was regarded as a mild-mannered, conservative lawmaker during his time in office. In a time of increasing political polarization, he stressed his 80-20 rule — politicians should focus on the 80% of things they agree on rather than the 20% where they are in opposition.

Read the full article. Enzi held the usual anti-LGBT positions but in 2013 was the only Republican to support ending the ban on gay men donating blood. Enzi last appeared on JMG in 2017 when he declared that “any man who walks into a bar in a tutu deserves to be punched.” After a social media uproar, Enzi issued a seemingly sincere apology to the local man he had referenced.

Former US Sen. Mike Enzi has died after a serious bicycle accident last week, a statement on his official Twitter account says. He was 77.https://t.co/wT7M7fCtVy