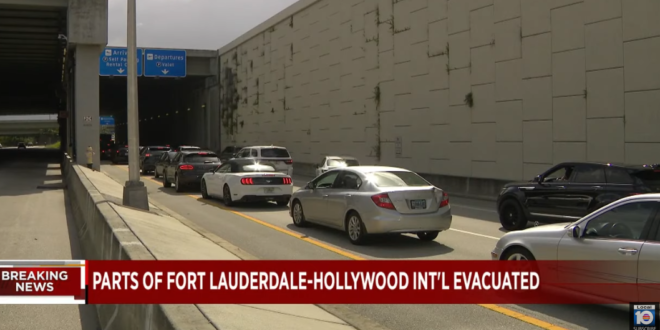 A bomb threat prompted the evacuation Saturday of terminals 2 and 3 and shut down entry to Fort Lauderdale-Hollywood International Airport. The Broward County Sheriff’s Office confirmed on its Twitter account that deputies at the airport are investigating a bomb threat reported at around 8:49 a.m.

Travel Alert #4: Law enforcement has just reclosed #FLL‘s lower-level roadway, and the upper-level roadway remains closed due to an ongoing security investigation. We apologize for any inconvenience, but the security & safety of our passengers & employees are our top priority.

Police have evacuated the airport following an ongoing incident occurring at the upper-level roadway near terminal 2
Traffic has been blocked in the area pic.twitter.com/Y58q9HkSAU

#FLL airport is on lockdown. Gossip from other stranded passengers is that it’s a bomb threat. All terminals closed and evacuated outside. Some passengers who were on planes were deplaned. No planes have taken off for the last 45m pic.twitter.com/vOzP6ZTYFs

#BREAKING — Bomb threat at Fort Lauderdale Hollywood Int’l has closed roads leading into airport. “Airport on lockdown,” a deputy told me. “Bomb squad inside checking to see if threat is credible… this will take a while.” Passengers are held outside and inside terminals. pic.twitter.com/OSDnJ1FsYT