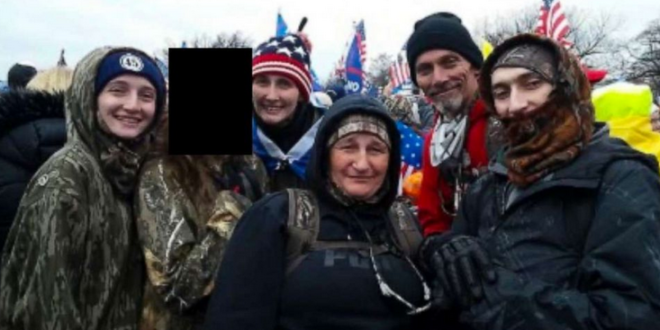 Five members of the same Texas family were arrested Tuesday and charged for their alleged participation in the Jan. 6 riot at the U.S. Capitol, according to newly-unsealed charging documents.

Kristi Munn, Tom Munn, Dawn Munn, Josh Munn and Kayli Munn — described by prosecutors as a nuclear family from Borger, Texas — are now each facing four federal charges over their alleged illegal entry and alleged disorderly conduct in the Capitol, according to a criminal complaint filed Tuesday afternoon.

A 34-page affidavit for their arrest details their movements while inside the Capitol on Jan. 6, based on surveillance and social media posts. The affidavit also indicates that the family brought an unidentified minor child into the building with them, who is not being charged.

An anonymous tipster reported seeing Kristi Munn post on Facebook and SnapChat about traveling to the rally and illegally entering the Capitol building, according to court documents. The tipster passed screenshots of Kristi Munn’s social media posts onto the FBI, which included photos of Josh Munn, who lives in Melrose, at the Capitol.

FBI investigators were able to identify members of the Munn family, including Joshua Munn, in surveillance video at the Capitol, entering through broken windows. They are later seen crawling out through a window at about 3:17 p.m. They were also seen in Jan. 6 video taken at the Capitol posted on Parler.

NEW: Texas family of 5 charged in US Capitol breach

Facebook posts galore referenced in court filings against the Munns, including Dad’s saying Trump asked Americans to be in DC on Jan 6, per feds

One Munn also posted, “F*ing great! Holy s** we were inside the f*ing capital” pic.twitter.com/MSUdYDuGse

Munn family, party of 5, your insurrection is right over here. https://t.co/YHuefbyFuA

It was really nice of the FBI to put together a slide show of the Munn family vacation at the Insurrection.https://t.co/y5Bqtg98TA pic.twitter.com/uTPbHeft4y