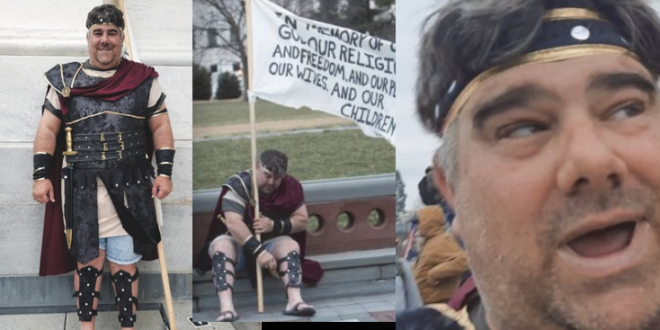 Federal authorities have arrested a man who they claim dressed up as a prominent figure from the Book of Mormon during the Jan. 6 attack on the U.S. Capitol Complex.

According to the text held sacred by members of the Church of Jesus Christ of Latter-day Saints, Captain Moroni was “the chief captain over the Nephites” and lived during the first century BCE.

Nathan Wayne Entrekin stands accused of committing two relatively minor crimes at the U.S. Capitol while donning a Roman-era gladiator-style costume in order to take part in the deadly pro-Trump breach — a religious cosplay the FBI felt important enough to document at length.

Online sleuths had dubbed him “Caesar No Salad.”

Man Who Allegedly Dressed as Book of Mormon Figure Who Raised Armies Against Tyrants Arrested Over Jan. 6 Attackhttps://t.co/78RiTlG5CE

A man who dressed up in a Roman Gladiator costume on Jan. 6 has been charged in connection with the Capitol riot.

“Here comes the riot police, Mom… This is our house! Wow, Mom. I wish you were here with me. It’s really exciting in here. It’s joyful and it’s sad at the same time. We can’t let Biden… to be our president.” https://t.co/GtBNh85bg1