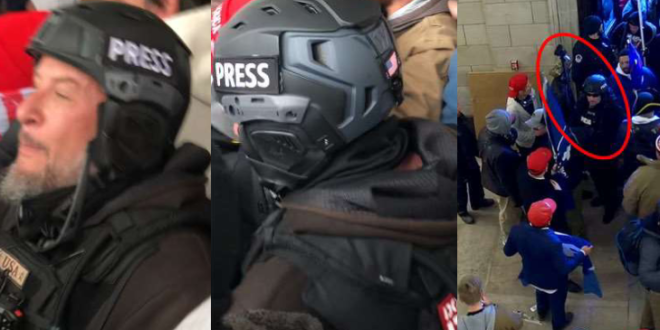 Matthew Thomas Purse milled among the mob on January 6 at the U.S. Capitol wearing a black tactical vest and helmet both bearing the letters, “PRESS,” the FBI reports. He was arrested Friday. “FBI received information from a confidential source (“CS”), who saw Purse on a live stream on Twitch, a live streaming platform, believed to be taken on January 6, 2021. During the livestream, Purse, wearing the helmet, ‘seems to admit he is not with press.’ The CS further described Purse stating to the camera, ‘Mission accomplished, we broke into the Capitol.’ The video has been since deleted.”

A search for this guy’s name turns up this 2009 Justice Department press release:

In one of the largest counterfeiting schemes of this type to date nationwide, a 19-count federal indictment was unsealed on January 30, 2009, charging Christopher Loring Walters, 28, of Newport Beach, Calif., and Matthew Thomas Purse, 32, of Gilbert, Ariz., with Conspiracy, Mail and Wire Fraud, Criminal Copyright Infringement, and Trafficking in Counterfeit Labels, Packaging or Containers. The indictment was returned by a federal grand jury in November 2008.

Purse appeared in federal court in Phoenix in December 2008, and was released pending trial, although no firm trial date has been set. Walters remains a fugitive. He is a 28-year-old male with brown hair and blue eyes. He is 59” and approximately 170 lbs. Anyone with information regarding his possible whereabouts is urged to call the FBI at 602-279-5511.

The indictment alleges that from September 2004 through February 2006, Walters and Purse created various eBay merchant accounts and other commercial Web sites from which to sell and distribute greatly discounted counterfeit software.

Matthew Thomas Purse, of Irvine, CA, milled among the mob on January 6 at the U.S. Capitol wearing a black tactical vest and helmet both bearing the letters, “PRESS”. He was arrested Friday. https://t.co/b0H3vK4mSQ