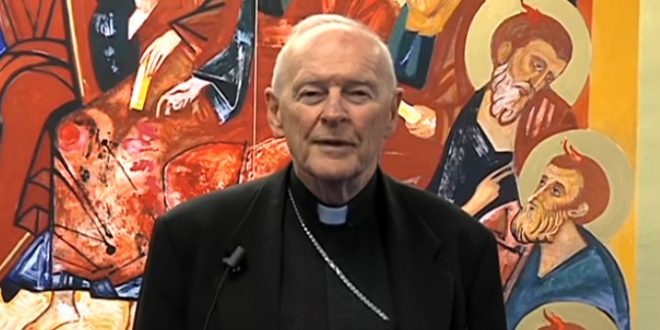 Ex-Cardinal Charged With Sexual Assault Of Teen Boy, Allegedly Then Told “Sinner” Victim To Pray For Himself

Former Cardinal Theodore McCarrick, who was defrocked after a Vatican investigation confirmed he had sexually molested adults as well as children, has been charged with sexually assaulting a teenage boy during a wedding reception in the 1970s, court records show.

Court documents obtained by The Boston Globe shows that McCarrick is charged with three counts of indecent assault and battery on a person over 14.

McCarrick is the first cardinal in the U.S. to ever be criminally charged with a sexual crime against a minor, according to Mitchell Garabedian, a well-known lawyer for church sexual abuse victims who is representing the man alleging the abuse by McCarrick.

A report filed in court says the man told investigators that McCarrick was a family friend and began abusing him when he was a boy. The man says McCarrick groped him when he was 16 in 1974 as they walked around the campus of Wellesley College, where his brother’s wedding reception was being held.

The man also alleges that McCarrick led him into a room and fondled the boy before telling him to “say three our fathers and a Hail Mary or it was one Our Father and three Hail Marys, so God can redeem you of your sins,” according to the court documents.

McCarrick, 91, was defrocked by Pope Francis in 2019 after a Vatican investigation confirmed decades of rumors that he was a sexual predator.

The suit, filed by a man using the pseudonym Doe 14, claims that in 1982 and 1983, when he was as young as 14 years old, he and other victims were taken on weekend overnight trips to a Sea Girt beach house.

Former Cardinal Theodore McCarrick, who was defrocked after a Vatican investigation confirmed he had sexually molested adults and children, has been charged with sexually assaulting a teenage boy during a wedding reception in the 1970s, court records show. https://t.co/c9UloHO8W5

Previous Anne Graham Lotz: Jesus Got My Son Out Of The ICU
Next Cultist Reps Booted From Prison Holding Rioters: We’re In “Totalitarian Marxist Territory, This Is A Dictatorship”