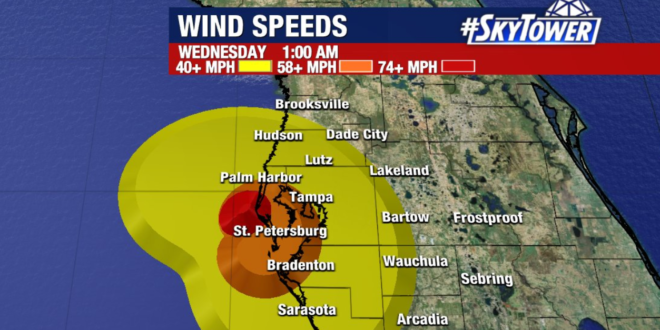 Tropical Storm Elsa is gaining strength in the Gulf of Mexico and may scrape Florida’s west coast, including parts of the Tampa-St. Petersburg metro, as a hurricane through early Wednesday with storm surge, high winds, flooding rain and isolated tornadoes.

This prompted the NHC to issue hurricane warnings for areas near the west coast of Florida from Tampa Bay northward to Steinhatchee. This warning, meaning hurricane conditions are expected, includes Tampa, St. Petersburg and Cedar Key.

Forecasters say conditions in Tampa will begin to deteriorate Tuesday afternoon as the storm approaches. So passenger flights will be suspended at 5 p.m. Tuesday, and cargo flights will stop at 10 p.m.

Officials say travelers should coordinate with their airlines to get up-to-date flight schedules over the next two to three days. They also discouraged anyone from coming to the airport for shelter during the storm.

While still lopsided, the spiral banding is looking more organized. More than likely #Elsa will try to be a hurricane on landfall. Fort Myers and Naples getting pretty squally weather right now.. pic.twitter.com/v6ZO0ukGLj