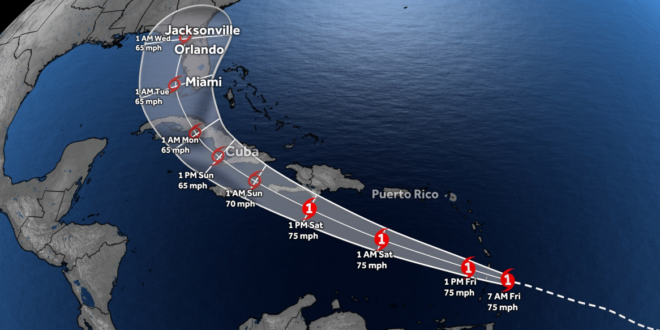 Hurricane Elsa formed over the waters of the Atlantic Ocean early Friday just west of the Caribbean island of Barbados, one day after the system became the fifth-named storm of 2021.

AccuWeather forecasters, having expected the cyclone to reach hurricane force, continued monitoring Elsa and predict it will approach the United States next week after it unleashes heavy rain, strong winds and stirs up dangerous seas around the Caribbean islands through this weekend.

Elsa was racing west-northwestward at 28 mph on Friday morning, about 20 miles west-southwest of Barbados and had maximum sustained winds of 75 mph.

BREAKING: Elsa has strengthened into a hurricane. Tune to The Weather Channel for the latest details all day. https://t.co/XkKlWbQr3P pic.twitter.com/iwDsYFCU2m

#Elsa has strengthened into a hurricane. A sustained wind of 74 mph with a gust to 86 mph was recently reported at Barbados. A special advisory is being issued shortly. More info: https://t.co/tW4KeFW0gB pic.twitter.com/oQ8aCP7mEv

Tropical Storm Elsa strengthened into a hurricane, prompting warnings in Barbados, St. Lucia and St. Vincent and the Grenadines after.

The storm could also affect parts of South Florida, where rescue efforts continue after a condo building collapsed.https://t.co/TuvEjK6KK8