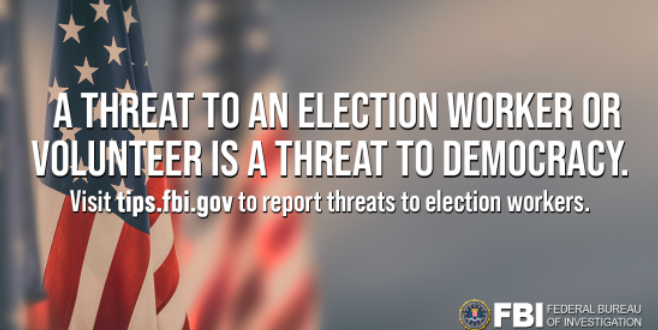 DOJ Task Force To Focus On Threats To Election Officials

The Department of Justice has launched a law enforcement task force to address the rise in threats against election workers, administrators, officials, and others associated with the electoral process.

“To protect the electoral process for all voters, we must identify threats against those responsible for administering elections, whether federal, state, or local,” said Deputy Attorney General Lisa O. Monaco.

“A threat to any election official, worker, or volunteer is a threat to democracy. We will promptly and vigorously prosecute offenders to protect the rights of American voters, to punish those who engage in this criminal behavior, and to send the unmistakable message that such conduct will not be tolerated.”

“The FBI will not tolerate threats against any federal, state or local election worker participating in the common goals of safeguarding our electoral process and the rights of voters,” said FBI Deputy Director Paul Abbate. “

From election administrators to volunteers to vendors and contractors, threats against any one individual is a threat against us all. The FBI’s mission is to protect the American people and uphold our Constitution, and protecting our democratic process is paramount. We take this responsibility seriously and will investigate any and all federal violations to the fullest.”