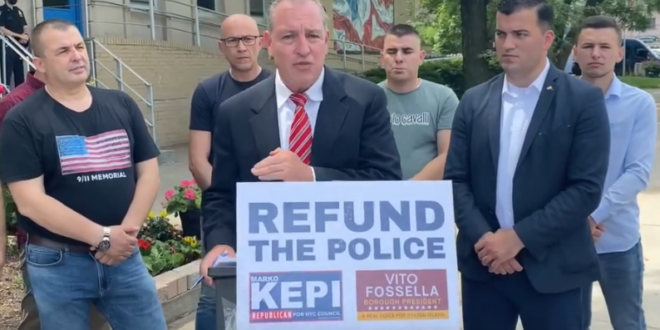 Like many other news organizations, Newsmax Media Inc. regularly spends money to promote its stories on the social media platform.

But Newsmax’s $25,000 expenditure for its piece touting the Trump endorsement in the local race stood out, given that it was the only of the cable outfit’s 54 ad buys last month that targeted a single state — New York — leading up to the city’s June 22 primary election.

Former Congressman Vito Fossella won the Republican nomination for borough president of the fifth borough on Tuesday — 12 years after leaving politics in scandal.

The seven-term congressman opted not to seek re-election for his House seat in 2008 after a drunk-driving bust in Virginia revealed he was quietly keeping a second family.

Anti-gay “family values” blowhard Rep. Vito Fossella (R-Staten Island), the only Republican representing New York City in Congress, was revealed as an adulterer and father of a “love child” this week after his arrest for driving drunk in suburban Virginia.

On the night of his arrest, Fossella attended a White House reception, then continued partying at a DC pub where he got so drunk he was asked to leave. Fossella told arresting officers that he was on his way to visit his sick three year-old daughter in Virginia, which no doubt came as a huge surprise to his wife and three children back in Staten Island.

Fossella’s baby mama is retired Air Force colonel and former congressional liaison Lauren Fay, who bailed Fossella out of jail. A blood-alcohol test showed Fossella with more than twice the legal limit, which calls for mandatory jail time. The seven-term Fossella has often been mentioned as possible NYC mayoral candidate.

During his time in the US House, Fossella voted against the Matthew Shepard Act, voted against same-sex adoption in DC, voted to withhold housing funds from San Francisco over their domestic partners law, voted to overturn President Clinton’s ban on anti-LGBT discrimination against federal employees, and voted for a federal ban on same-sex marriage. He did all this while adulterously fucking and impregnating the mistress he was secretly keeping in DC.