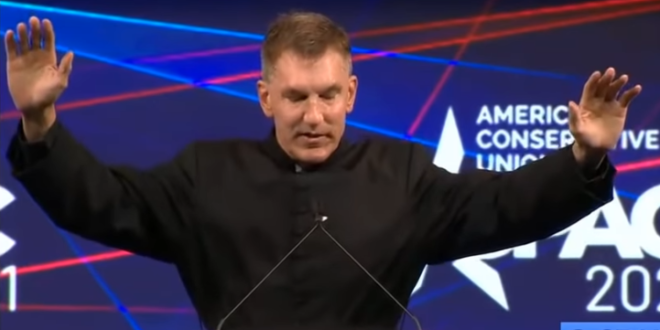 The Diocese of La Crosse announced Friday that it was removing a controversial La Crosse priest from his role as pastor. Father James Altman will no longer serve as pastor of St. James the Less, a Catholic church on La Crosse’s north side, after he delivered a slew of political messaging and misinformation. In May, Altman was asked to resign by the Diocese after he shared a number of messages about race, political affiliation, sex and gender, and misinformation about COVID-19 and the vaccine.

Last September, the Tribune first reported on a video from Altman posted and produced by a right-wing media outlet where he claimed that Catholics could not be Democrats, calling them “Godless” imposters who are going to hell. He received more backlash in April for issuing a pamphlet to his parish urging them not to be “guinea pigs” of the COVID-19 vaccine and for loose precautions against the virus during services.

Read the full article. Altman has become, of course, a right wing folk hero and regularly appears on cultist shows.

Which brings us to yesterday’s CPAC prayer.

At the morning prayer at CPAC, the pastor says that God made heaven and earth, “and that’s all the science we need to know.” On brand. pic.twitter.com/UpcsKkEXHy