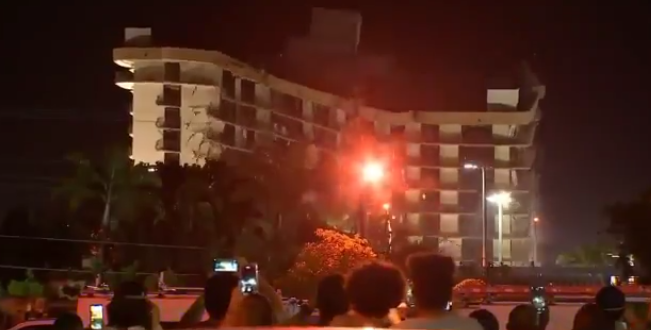 The remaining portion of the Champlain Towers South condo building in Surfside was demolished Sunday night.

The structure came down at about 10:30 p.m., and before 11:30 p.m., rescuers were given an all-clear to resume their search, according to Miami-Dade Mayor Daniella Levine Cava. Officials had given a window of the demolition occurring between 10 p.m. and 3 a.m. Monday.

“It went absolutely perfectly. We are so, so grateful that we can get this building down and move on with our search efforts,” the mayor said. “It’s made it possible for the team to go out. I just came from the briefing session, they’re going out.”

SEE IT: Eleven days after the Surfside building collapse, the remaining part of the building has been demolished over safety concerns. Here’s the view of demolition from the water. https://t.co/RcHzNj4m9z pic.twitter.com/sUSojZHrtp