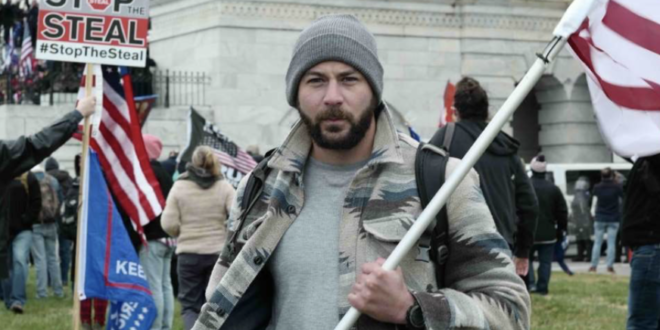 A federal Drug Enforcement Administration agent who was on leave and about to resign was arrested Tuesday for illegally entering the Capitol grounds on Jan. 6, according to filings in a Washington federal court. He is the first federal law enforcement official arrested in connection with the Capitol siege.

The agent, Mark Sami Ibrahim of Orange County, California, did not enter the Capitol or engage in any violent acts, a court document said. But he flashed his badge and DEA-issued sidearm in photos, entered the restricted area of the grounds and later climbed on the Peace Memorial at the foot of Capitol Hill, prosecutors said.

Charging documents include photos posted to WhatsApp – from a group chat with at least five other police officers – and images from surveillance video that appear to show Mr Ibrahim posing with his badge and gun and climbing monuments on the Capitol grounds.

“I had my creds. I had my firearm, and my badge on me ,” he told investigators, according to charging documents. “But never exposed … Not that I know of.” He said he went to the riot with a friend, who he claims was asked by the FBI to document the event – which his friend denied, according to federal prosecutors.

Mark Sami Ibrahim, a special agent with the DEA, brought his service weapon and badge to the Jan. 6 Capitol siege, displaying them for multiple photos taken in restricted areas on the Capitol grounds after police barricades were overrun.https://t.co/rQGGiQ6pXx

Mark Sami Ibrahim was reportedly planning to leave the DEA and “wanted the protests to be his stage for launching a ‘Liberty Tavern’ political podcast and cigar brand.” https://t.co/y8Li6kNjWg

A video posted on the internet also showed Mark Sami Ibrahim carrying a flag bearing the words “Liberty or Death” outside the Capitol, about 12 minutes before a mob of people pulled apart a nearby set of barricades, authorities said. https://t.co/UQ3X4Hr2Vj

Mark Sami Ibrahim was charged with knowingly entering or remaining on restricted property, carrying a deadly weapon, making false statements to investigators, and climbing onto a statue on the grounds.https://t.co/yuK49dYxfx

Previous McConnell Rants: Stop Listening To “Demonstrably Bad Advice” And Go Get That Shot Into Your Arm [VIDEO]
Next Cawthorn Calls For “Punk Liar” Fauci To Be Arrested