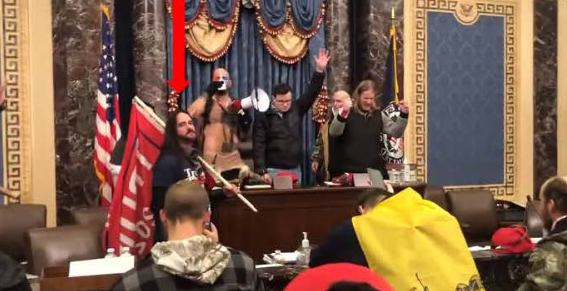 A lawyer for Paul Hodgkins, who pleaded guilty last month to one count of obstructing an official proceeding, asked U.S. District Judge Randolph Moss not to impose a prison sentence, saying the shame that will attach to Hodgkins for the rest of his life should be factored in as punishment.

“Whatever punishment this court may provide will pale in comparison to the scarlet letter Mr. Hodgkins will wear for the rest of his life,” Patrick N. Leduc wrote in a recent filing, citing a Nathaniel Hawthorne novel in which a woman accused of adultery is forced to wear a letter “A.”

And here’s the sentence, followed by a blow-by-blow accounts from inside the courtroom.

LESS than the 18 months prosecutors were seeking…

Judge cites lack of criminal record, lack of any leadership of mob on Jan 6, says Hodgkins statement to court as “sincere” pic.twitter.com/7Adgh3NoZM

Judge sentences Paul Hodgkins to 8 months in prison and 24 months on probation….10 months less than the feds were asking for.

Defendant Hodgkins, “I came to DC to participate in an event for a president I love.”

Defendant Hodgkins, “Joseph R. Biden is rightfully and respectfully the president of the United States.”

Defendant Hodgkins, “I do not blame any politician or journalist” for my conduct.

Defendant Hodgkins made an effective statement to the judge (IMO). However, his attorney is undercutting it by attacking the notion the this was domestic terrorism. He said people calling 1/6 “domestic terrorism” are “gaslighting” country. Not effective lawyering (IMO).

To put it bluntly, defendant Hodgkins behaved like the lawyer and the lawyer ranted like an out-of-control client. Strange choice by the lawyer.

The judge is pushing back on the defense attorney’s obvious, transparent and offensive mischaracterizations of what happened on 1/6.

The defense attorney is now calling his client “Paul” and, when being corrected by the judge on some facts, he shoots back, “well, that’s my best guess.” This is poor lawyering.

At this point, the defense attorney should consider quitting while he’s behind.

Defense asks for a sentence of “no confinement” suggesting this will “heal the nation.”

Defense attorney just agued, “this man lives in the poorest section of Florida.” It’s “like Southeast, DC.” He should stop talking. This is offensive.

“You carried a large red flag with ‘Trump 2020’ in red letters,” he says, saying that he took selfies and raised the flag in salute.

Although Mr. Hodgkins was only one member of the mob, he participated in an attack on “democracy itself,” the judge says.

“It will be harder for all of us to convince our children that democracy stands as the immutable foundation” of this country.

“Those are all enormous harms” caused by the events that day.

Judge Moss calls it extraordinary that the mob succeeded in delaying certification.

“They did not like what Congress was about to do,” the judge says.

“That is chilling for many reasons,” he says.

Moss: Although Hodgkins was part of a larger mob, he “actively and intentionally” participated in an event that not only threatened security of the Capitol but also “democracy itself.” Fact that lawmakers forced to stop performing core function and had to flee was “chilling”

Judge: The goggles Hodgkins brought shows he was ready for conflict. “He came that day to defend his position..d engage in whatever has to be done”

“He observed the mayhem… It was obvious as her approached the Capitol. he was participating in ongoing attack”

BOOM. Judge says Jan 6 makes it more difficult for our children and grandchildren to maintain democracy

Says things are now harder than they were seven months ago

And he’s tying Hodgkins to this…. standby

Moss: People “have to know” that assaulting the Capitol and impeding the democratic process, even if they don’t bring a weapon, “will have severe consequences”

Moss focuses on Hodgkins carrying a “TRUMP 2020” flag onto the Senate floor: “The symbolism of that act is unmistakable” – he was staking a claim on the Senate floor, declaring his loyalty to a single individual over a nation

Moss is now noting the factors that weigh in Hodgkins’s favor, including lack of previous criminal history, his early acceptance of responsibility, his commitment to improving his life and doing community service in the months since Jan. 6