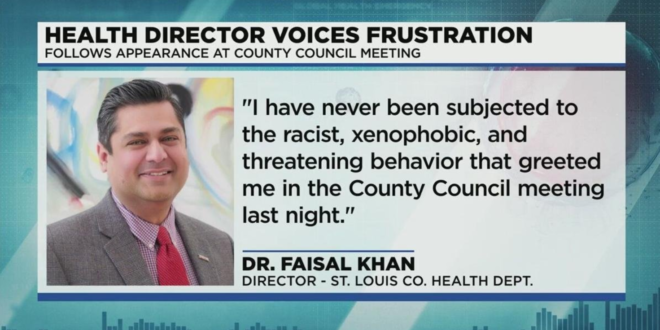 My time before the Council began with a dog-whistle question from Councilman Tim Fitch, who said he wanted to emphasize for the assembled crowd that I was not from this country. As you know — and as Mr. Fitch surely knew since he was the crowd’s leader — the great majority of the people in the raucous crowd appeared to be from the “MAGA” movement, as evidenced by their “Trump 2024” chants.

The MAGA movement is well-known for xenophobia and discriminatory treatment of racial minorities and has engaged in violent acts against government institutions like in our nation’s capital on January 6. I later saw that around the time that Mr. Fitch asked his question, his friend Mark McCloskey — who was seated right behind me and situated near Mr. Fitch’s position on the dais — posted on social media that mask mandates are “un-American.”

After my presentation was completed, I tried to leave the chamber but was confronted by several people who were in the aisle. On more than one occasion, I was shoulder-bumped and pushed. As I approached the exit and immediately outside the chambers, I became surrounded by the crowd in close quarters, where members of the crowd yelled at me, calling me a “fat brown cunt” and a “brown bastard.”

Khan adds that people in the audience mocked his accent by quoting The Simpson’s character Apu. Mark McCloskey, you probably know, is the US Senate candidate made famous for threatening BLM protesters with a rifle. The mask mandate was rescinded in a 5-2 vote.