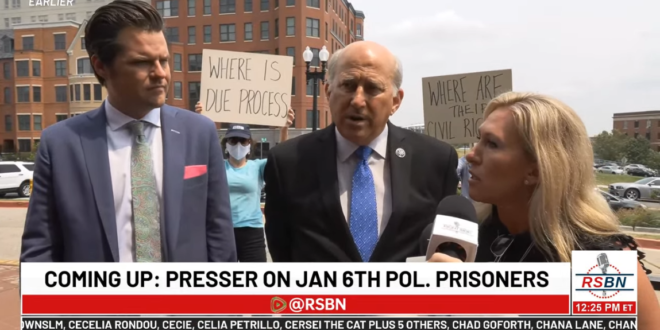 Cultist Reps Booted From Prison Holding Rioters: We’re In “Totalitarian Marxist Territory, This Is A Dictatorship”

Reps. Matt Gaetz (FL), Marjorie Taylor Greene (GA), and Louie Gohmert (TX) complained on Thursday after prison officials refused to allow them to enter a facility housing people who allegedly attacked the U.S. Capitol on Jan. 6. Conservative news outlets OAN and RSBN covered the lawmakers’ attempt to enter the facility. The stunt was billed as an attempt to check on the welfare of Jan. 6 “political prisoners.” But before Gaetz could open the door, it was locked by an officer.

Read the full article. Outside the prison, Gohmert declared, “We have turned a corner here. We’re in totalitarian Marxism territory here. This is the way third world people are treated. This is a dictatorship.”

Wow… @MattGaetz, @mtgreenee, @replouiegohmert, and @RepGosar have been locked out of the federal prison while trying to ask questions and evaluate the conditions! pic.twitter.com/sci9YtDWRb

Gaetz, Greene, Gohmert and Gosar showed up today at the prison where insurrectionists are incarcerated, demanding to be let in to inspect the facility. They were ordered to leave or be arrested for trespassing, which they did. pic.twitter.com/a67U8SVI40

At one point, Gohmert tries to argue that he has a “top secret clearance,” so he should be allowed in. (Didn’t work). pic.twitter.com/LBEkkwOW8p

After getting kicked out, Gohmert said they went down there because he heard the insurrectionists were “being treated worse than the bloodthirsty terrorists at Guantanamo.” pic.twitter.com/pgXJR0bJa6

Previous Ex-Cardinal Charged With Sexual Assault Of Teen Boy, Allegedly Then Told “Sinner” Victim To Pray For Himself
Next FBI Most Wanted Capitol Riot Suspect Collared In PA