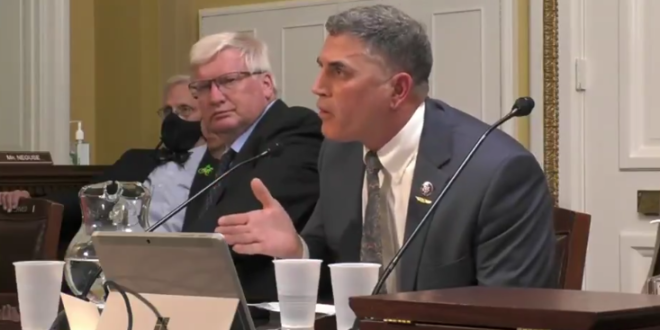 Rep. Andrew Clyde (R-Ga.) said during a fiery back-and-forth in a House committee hearing on Tuesday that he stands by comments comparing the Jan. 6 attack on the U.S. Capitol to a “normal tourist visit” and his vote against congressional gold medals for law enforcement that responded to the attack, on the same day that four officers told of their near-death experiences defending the Capitol.

The back-and-forth often devolved into shouting matches between the two lawmakers, with Rep. Jim McGovern (D-Mass.), the Rules Committee chair, intervening several times to “lower the decibel.” “We are here to discuss this amendment and you are obviously not interested in that. You want to make this another Jan. 6 hearing, and it’s not! This is the rules committee!” Clyde said at one point.

Clyde: “I stand by that exact statement as I said it.”

This came after Raskin asked Clyde initially if he stood by his initial statements and Clyde said he wanted Raskin to read his whole statement. Raskin came prepared and read the whole quote out loud.

But Clyde then repeatedly rejected Raskin’s premise that the people who attacked the Capitol on January 6 were terrorists and not tourists.

“That statement did not say that those people were tourists” Clyde said. “Read the statement.”

When Raskin tried another way by asking Clyde to respond to police officers taking issue with “an internet meme that the people here were just tourists,”
Clyde: “I’m not responsible for an internet meme, okay?” “You want to make this another January 6 hearing, but it’s not.”

“I stand by that exact statement as I said it,” Clyde says of his “normal tourist visit” remark. pic.twitter.com/Fn9JqYVWAI

If Rep. Clyde (R-GA09) thought the Jan 6th terrorists were “just tourists” why was he terrified enough to help barricade the door to the House chamber against them? pic.twitter.com/BkiLIe3BBs