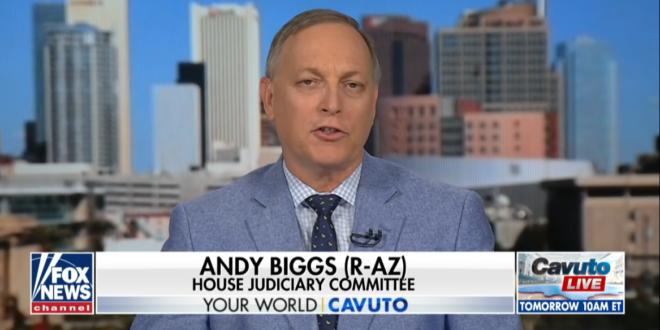 Rep. Andy Biggs (R-AZ) took to Twitter on Monday to lob an attack at President Joe Biden about drugs seized along the U.S.-Mexico border. What must have sounded like a sharp attack in his mind got a far different reception online, as hundreds of Twitter users did their best to school him.

Many of those who responded to his tweet asked instead why Biggs was outraged about drugs being stopped at the border — in other words, seized by law enforcement and not getting into the country where they could be abused by Americans.

It was seized, Congressman. That means, law enforcement prevented its entry into the United States. Don’t you have an insurrection to foment?

Ummm, they SEIZED the fentanyl, right? What’s the problem?

Meanwhile, YOU were named by Ali Alexander for helping to plan the January 6th Capitol “tour.”

Have a seat, Andy.

Republican self-beclownment of the day.

Yes, where’s the outrage that Biden stopped all this fentanyl from entering the US?

Very, very angry that the DEA/Border Patrol/Customs did their job, thank you for sticking up for all that poor fentanyl, sir.

Yes! Where’s the outrage that Americans aren’t getting their fentanyl bc Biden seized it? Come on, people! https://t.co/dAnngP6eOn

Did … did fentanyl write this? https://t.co/J7nAAnXFsb