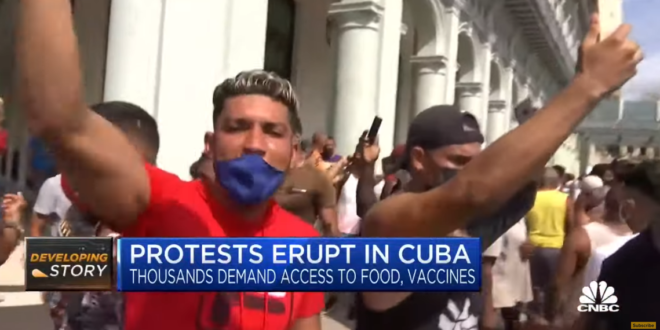 Shouting “Freedom” and other anti-government slogans, hundreds of Cubans took to the streets in cities around the country on Sunday to protest food and medicine shortages, in a remarkable eruption of discontent not seen in nearly 30 years. Hundreds of people marched through San Antonio de los Baños, southwest of Havana, with videos streaming live on Facebook for nearly an hour before they suddenly disappeared.

As the afternoon wore on, other videos appeared from demonstrations elsewhere, including Palma Soriano, in the country’s southeast. Hundreds of people also gathered in Havana, where a heavy police presence preceded their arrival. “The people are dying of hunger!” one woman shouted during a protest filmed in the province of Artemisa, in the island’s west. “Our children are dying of hunger!”

In a nationally televised address, President Díaz-Canel said US trade sanctions had created economic misery on the communist-run island. Díaz-Canel did not offer the protesters any concessions in his speech.

“The order to combat has been given,” he said at the end of his appearance, “Revolutionaries need to be on the streets.” In the city of San Antonio de los Baños, just outside Havana province, hundreds of people defied a heavy police presence to air their complaints.

One resident who did not wish to be identified told CNN that residents had been enduring power outages for a week and that had “detonated” the growing outrage.

Hundreds held up Cuban and U.S. flags at the Versailles Restaurant in Miami’s Little Havana on Sunday afternoon, prompting Miami Police to close a major thoroughfare to vehicle traffic for several hours, “in support of a demonstration and to ensure the safety of all participants.”

The demonstrations in Miami drew an outpouring of support from local leaders, including the Miami-Dade Mayor, Senator Marco Rubio, and congressional representatives from several districts.

The collective Florida Democrats account belittled the Cuban government as “nothing more than a failed tyranny,” while expressing support for the anti-government protesters: “We stand with the Cuban people as they raise their voices in protest of a repressive government that refuses to help its people.”

We stand united with the Cuban people on the island and across our community at this historic moment in the struggle for freedom, dignity, and basic human rights – may their courageous actions bring about real change and move us closer to the dream of a free Cuba. #SOSCuba https://t.co/1YzrPd8UDF

We are deeply concerned by “calls to combat” in #Cuba. We stand by the Cuban people’s right for peaceful assembly. We call for calm and condemn any violence.

Why is it so hard for @potus & the people in his administration to say that? #SOSCuba #PatriaYVida https://t.co/vLt8SCUXeK pic.twitter.com/gP0KapjvnQ

The protests we are seeing in Cuba are pretty massive. Probably the biggest in decades.

This is a combination of social unrest based on a lack of freedoms, covid, and economic conditions. People are screaming for freedom.

My quote in @washingtonpost:
https://t.co/gBgzwwN8tU

Florida supports the people of Cuba as they take to the streets against the tyrannical regime in Havana. The Cuban dictatorship has repressed the people of Cuba for decades & is now trying to silence those who have the courage to speak out against its disastrous policies#SOSCuba pic.twitter.com/H71EYoKdUZ

I have lived in Cuba for nine years and the scenes we saw today were stunning. The protests spread more quickly than anyone could have imagined. I don’t know what tomorrow will bring but the level of discontent and anger isn’t going anywhere. pic.twitter.com/K8LZyuBY1R