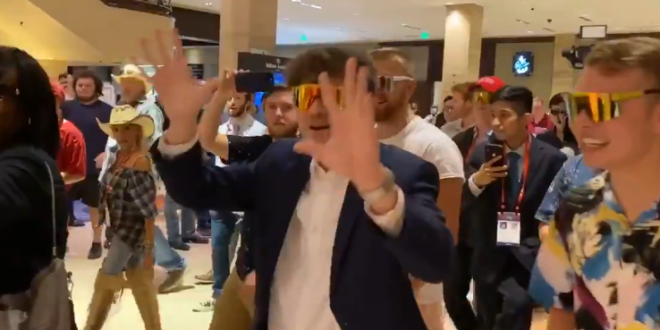 White nationalist Nick Fuentes was kicked out of CPAC in Dallas on Saturday. The 22-year-old has not been welcomed at past CPAC events due to his fringe, far-right beliefs.

Fuentes entered the conference with a group of supporters chanting “Groyper,” a term based on a meme that now represents a loose group of white nationalists who have worked to insert far-right ideas into more mainstream conservatism.

In February, he was booted from Orlando’s CPAC event after he started speaking on the floor. He then bragged that the far-right spinoff of CPAC, called AFPAC, didn’t have “homosexuals speaking on the stage.”

This is how Nick Fuentes got kicked out of CPAC. pic.twitter.com/V5hAANU5qm

Nick Fuentes, a white nationalist barred from CPAC, came to the conference hotel for a good few minutes and hurled insults at reporter @ZTPetrizzo: pic.twitter.com/zKG8NDaE58

Previous Riot Suspect Who Screamed For Killing Pelosi Declares Immunity From The Law As An “Ambassador Of Christ”
Next LIVE VIDEO: Virgin Galactic’s First Commercial Flight