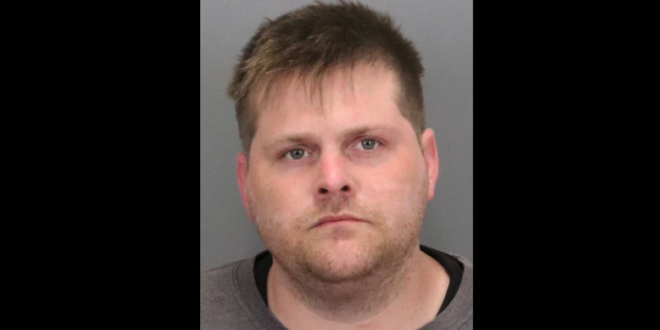 When police officers arrested a Los Gatos man on suspicion of prowling around a car lot last week, authorities say they discovered far more troubling threats after they searched his truck, turning up a cache of weapons, a handwritten manifesto about committing genocide and bullets that he personally inscribed, one of them with the words “Cop Killer.”

Wesley Charles Martines also had reportedly sketched out a plan to violently take over a sporting goods store and tie up its employees.

The manifesto, according to Campbell police and the Santa Clara County District Attorney’s Office, depicted “violent scenarios/fantasies” and contained writings voicing his desire to “wipe out the Black, Hispanic and Jewish populations.”

Pictures released by the Santa Clara police show multiple assault rifles inside a truck, along with a Glock handgun. Photos also show what appears to be a tactical vest containing multiple blades, and a U.S. flag attached at the top.

A journal in the truck contained racist and antisemitic writings and a plan to go to a sporting goods store, dress up as an employee, and tie everybody up, according to the statement. Officials also found body armor, heroin, methamphetamine, and a pipe bomb filled with pellets, but no explosive material inside.

Police used a gun violence restraining order (GVRO) to seize Martines’ weapons. GVROs can be used to take firearms away from people who are considered to be either a threat to themselves or to others.

Update: Wesley Charles Martines, arrested last week in Campbell, was reportedly driving around with 2 assault rifles, body armor loaded with extended mags and throwing knifes, and a manifesto voicing a desire to ‘wipe out the Black, Hispanic and Jewish populations.’@mercnews https://t.co/3lNGcwR8by