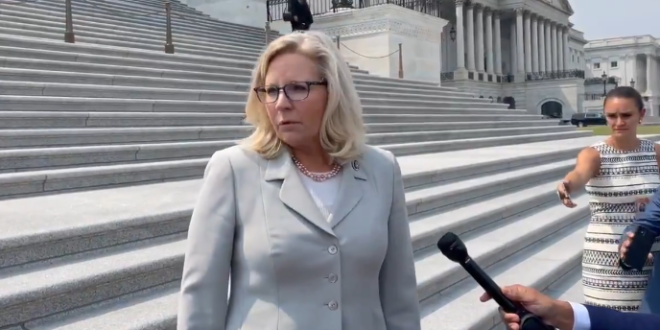 Republican congresswoman Liz Cheney did not hold back on her colleagues today, as she blasted House minority leader Kevin McCarthy and his decision to remove all the Republicans that he appointed to the House select committee tasked with investigating the 6 January attack on the US Capitol. She pointed out that one of the two Republican appointees that House speaker Nancy Pelosi rejected – Jim Banks and Jim Jordan – “may well be a material witness to events that led to” the attack.

Cheney blasted McCarthy , claiming that he is working to undermine an investigation into the Jan. 6 attack on the Capitol “at every opportunity.” “There must be an investigation that is nonpartisan, that is sober, that is serious, that gets to the facts, wherever they may lead,” Cheney told reporters outside the Capitol. “And at every opportunity, the minority leader has attempted to prevent the American people from understanding what happened to block this investigation.”

Rep. Liz Cheney says one of the two lawmakers Speaker Pelosi rejected “may well be a material witness to events that led to” the Jan. 6 attack. https://t.co/hPo777vDoI

“I agree with what the Speaker has done,” @Liz_Cheney tells @mkraju about the 1/6 committee, after @SpeakerPelosi blocked two GOP members who denied insurrection from serving on commission. She calls McCarthy’s rhetoric: “disgraceful.”

NEW: Cheney says McCarthy should NOT be speaker.

BREAKING: Kevin McCarthy has now pulled all 5 of his members from the House Select Committee on January 6, which is fine because the Committee was already bipartisan due to the presence of Liz Cheney. In my opinion, Pelosi should now ask Kinzinger to join. https://t.co/XwuDY1N8xB

‘Despicable and Disgraceful’: Cheney Slams McCarthy Over Jan. 6 Investigation, Says He Should Not Be House Speaker https://t.co/nsmSxVBTM7