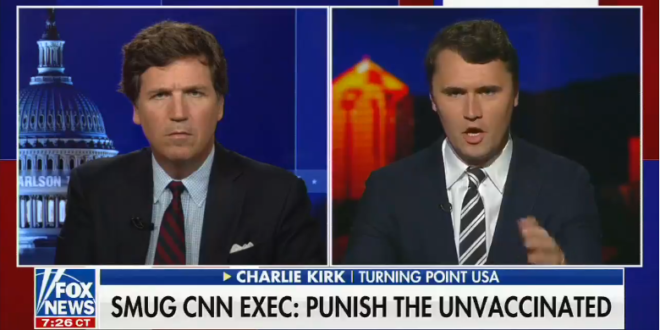 “Is it CNN’s position now that if someone decides to refuse to get the vaccine, like I have, that I’m going to come under some sort of punishment? What does that mean? What does the stick look like in CNN’s world? Are they reporting on the news, or are they trying to actually — trying to subsidize or incentivize human beings towards a certain outcome? Are they trying to go after stories that are actually going to hold powerful people accountable?

“The other question is why all of a sudden in the last 48 hours has there been this almost coordinated effort of people on the establishment center-right, kind of virtue signaling and telling every single person to get vaccinated, while we’re starting to see this kind of disturbing increase of activity on the VAERS database?” – Charlie Kirk, who also yesterday suggested that COVID vaccines have killed 1.2 million Americans.