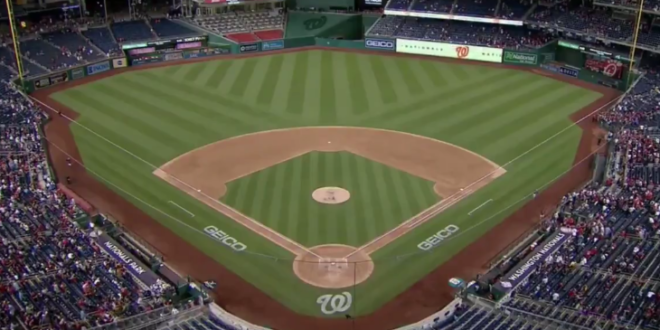 Three people were shot and wounded outside Nationals Park during a game between the Nats and the San Diego Padres on Saturday night, sending fans scrambling for safety and prompting the suspension of the game. The gunshots caused panic among fans inside the stadium, some of whom ducked for cover, hiding underneath tables and behind seats as announcers warned people to stay inside the park.

“It was just a chaotic scene,” umpire crew chief Mark Carlson told The Associated Press. “We heard what sounded like rapid gunfire. We didn’t know where it was coming from.” Fans sitting in left field quickly began leaving through the center field gate. A short time later, fans along the first base side began briskly leaving their seats. Some fans crowded into the Padres’ dugout on the third base side for cover, while sirens could be heard from outside the park.

No other high income country has their public events interrupted by gunfire and active shooter announcements. None.

At around 9:30 p.m. on Saturday night, shots could be heard from inside the stadium, leading people to flee for shelter amid the unknown chaos.https://t.co/nVP87HD7ZK

Shots fired outside Nationals Park. Many people, including Nationals SP Patrick Corbin, fled for the concourse. Many have taken shelter in bathrooms or suites. @nbcwashington pic.twitter.com/BephZ0kBVO

A shooting has been reported outside of the Third Base Gate at Nationals Park.

Fans are encouraged to exit the ballpark via the CF and RF gates at this time.

We’re working with law enforcement to provide more information as soon as it becomes available.

Here is the footage of Manny Machado, Fernando Tatis Jr. and Wil Myers helping fans when in fear (of the shooting at Nationals Park). pic.twitter.com/9ApuHIs4Oy

Hope everyone is safe at Nationals park. I heard a few loud bangs and then a mass exodus. View from my roof pic.twitter.com/MA1B7z83u2

I was in nationals park tonight when the gun shots rang out. While I ducked under my seat, watching people run, wondering if there was a shooter coming my way, I felt sacred but also angry. Angry at how predictable this sort of things is in the USA.

Tonight’s game has been suspended due to an incident surrounding Nationals Park.

Fans were evacuated from Nationals Park Saturday night after a shooting occurred outside the stadium. Footage shows people rushing to leave the stadium, and the game has been suspended. https://t.co/HE4P1BXHsj pic.twitter.com/Pv0mRYiDqX

Reports of an active shooter near Nationals Park in D.C.

Fans are taking cover under the seats, some running into the dugout to hide

This is the price of NRA’s freedom & Congressional inaction. Americans fearing for their lives at a Major League Baseball game due to gun violence. pic.twitter.com/Z5fdfy23sQ #GunsDontMakeUsSafer #EndGunViolence #NationalsPark