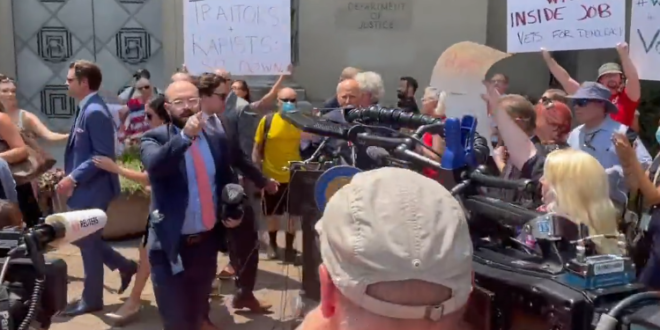 Members of the so-called sedition caucus, the moniker given to Republican lawmakers who have refused to acknowledge the truth of what happened on Jan. 6, were chased out of their own press conference on Tuesday by a man blowing a whistle and a protester holding a “RAPIST” sign.

Rep. Matt Gaetz (R-FL), who is under federal investigation for sex trafficking, appeared alongside other proponents of the “Big Lie” like Reps. Marjorie Taylor Greene (GA), Paul Gosar (AZ), and Louie Gohmert (TX) to complain about the Jan. 6 hearing that was underway in the House on Tuesday morning.

Read the full article. The last clip below? Whee! That’s Greene’s spox shouting, “Media! You saw what happened here! The left shut us down! The left hates free speech!” Watch Gaetz flee a woman shouting repeatedly, “Are you a pedophile, Congressman Gaetz?”

A man blowing a whistle and a protester holding a “RAPIST” sign behind Rep. Matt Gaetz derailed the press conference https://t.co/b7pPGumbcw

Reps. Gaetz, Gosar, Gohmert, and Greene’s DOJ presser is being derailed by one whistler. pic.twitter.com/aAcsSuRSBx

The whistler is entirely drowning out the GOP members. pic.twitter.com/kgTO5xnwJL

Reps. Gaetz and Greene get run out of their own presser at the DOJ. pic.twitter.com/Jc3BTbUO05