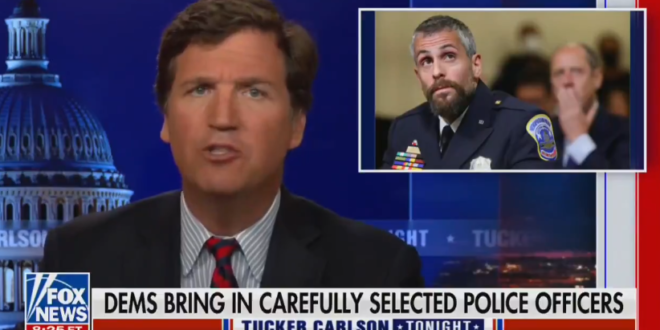 At the hearing, Aquilino Gonell — a former Iraq war veteran — had said in a tearful speech that “on January 6th for the first time, I was more afraid to work at the Capitol than my entire deployment to Iraq.”

Carlson responded, saying: “Actually what happened on January 6, according to the video we do have, does not look a lot like Iraq. It’s not Fallujah.” He played footage of a relatively quiet segment of the Capitol invasion, with protesters milling peacefully about the rotunda. Extensive footage exists of much more violent moments.

Fanone also excoriated the “indifference” shown to officers who defended the Capitol that day, adding: “I’ve been left with the psychological trauma and the emotional anxiety of having survived such a horrific event.” Carlson outright laughed at this.

Fanone was nearly beaten to death and suffered a heart attack!

Laura Ingraham, Brit Hume, and Tucker Carlson were on TV whitewashing 1/6 and mocking the brave officers like Michael Fanone who testified yesterday. It’s time to DO something about Fox.