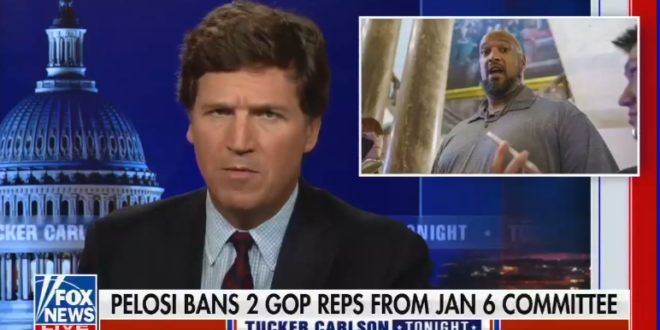 “On Tuesday, Nancy Pelosi will call a Capitol Police Officer called Harry Dunn. Dunn will pretend to speak for the country’s law enforcement community. But it turns out Dunn has very little in common with your average cop.

“Tonight #FoxNews allowed its host #TuckerCarlson, who has not served a day in uniform, whether military or law enforcement, to criticize the heroism and service of African-American U.S. Capitol Police Officer #HarryDunn.

3/Our client has served 13 years in law enforcement and on January 6, 2021, fought against an insurrectionist violent crowd – no doubt many of them Carlson’s supporters – to protect the lives of our elected officials, including Vice President #Pence.

4/Officer Dunn, who would lay down his life to protect a Member of Congress, regardless of being a Republican or Democrat, will testify next Tuesday before the House Select Committee investigating the events of the insurrection.

END/Frankly, the last thing @TuckerCarlson wants is for the truth to emerge of what happened that day and why.”

Previous US COVID Cases Have Nearly Tripled In Two Weeks
Next Fox Host: When The Oceans Rise, Just “Adapt To It”