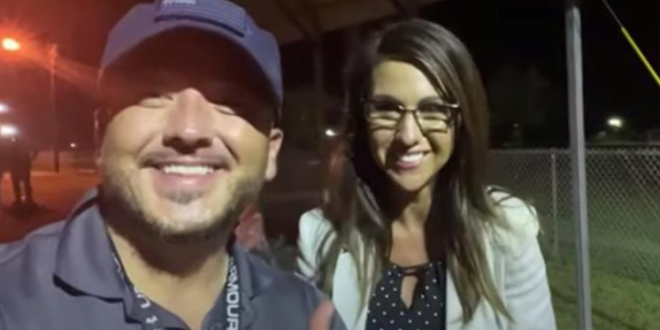 A conservative YouTuber who participated in the January 6 riot accompanied Republican members of Congress on a trip to the border Tuesday night, serving as a translator at times. Anthony Aguero, a close ally of Rep. Marjorie Taylor Greene can be seen in videos and photos with Republican members of Congress who traveled to a route along the border frequented by migrants on Tuesday night. CNN’s KFile previously reported that Aguero went into the Capitol during the January 6 riot and cheered and justified the break-in.

During his livestream of the Tuesday visit, Aguero interviewed and chatted with Reps. Tom. Tiffany of Wisconsin, Lauren Boebert of Colorado, Madison Cawthorn of North Carolina, Chris Jacobs of New York, Michael Cloud of Texas, John Rose of Tennessee, Ronny Jackson of Texas, and Mary Miller of Illinois. Aguero has not been charged for unlawful entry at the US Capitol on January 6. After chanting “heave-ho” as rioters attempted to break in, he entered the Capitol Rotunda and later chanted “our house” on the Capitol steps.

Read the full article. Aguero ran for the US House in 2020, finishing third in the GOP primary with 13% of the vote.

“We were all there. It was not Antifa and it was not BLM. It was Trump supporters that did that yesterday. I’m the first to admit it, being one myself,” Antony Aguero, a close associate of @RepMTGhttps://t.co/Z6cnWQ3CCL

CNN is cooking up another hit piece on yours truly… let’s see what kind of conspiracy theories they come up with this time. #CNNsucks