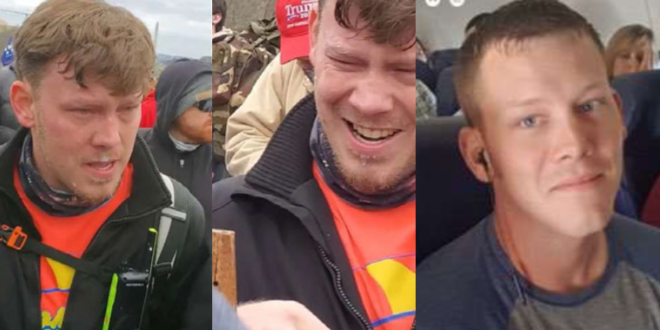 Andrew Quentin Taake, 32, of Houston, is charged with federal offenses that include assaulting, resisting or impeding certain officers and obstruction of an official proceeding, among other charges. Taake made his initial court appearance in the Southern District of Texas today.

According to court documents, Taake was on Capitol grounds on the afternoon of Jan. 6. At approximately 1:16 p.m., he can be seen on Metropolitan Police Department (MPD) body-worn camera (BWC) footage approaching and pepper spraying a line of police officers who were trying to prevent rioters from entering the building.

Around 2 p.m., Taake can be seen engaging in a second assault on law enforcement. As depicted in BWC footage, Taake emerged from the crowd and struck officers with what appeared to be a whip-like weapon. Taake can be further observed on video walking through the U.S. Capitol building holding the whip-like weapon.

#BREAKING Andrew Quentin Taake was arrested by FBI Houston today in connection to the Jan. 6 breach of the U.S. Capitol. Taake is charged with assaulting, resisting or impeding certain officers and obstruction of an official proceeding, among other federal charges. #HouNews pic.twitter.com/8l0jFIW8R6

JUST IN: Andrew Quentin Taake, 32, is charged with assaulting, resisting or impeding certain officers and obstruction of an official proceeding. He is accused of using pepper spray on police and a whip-like weapon against them. @FBIHouston

Andrew Quentin Taake appears to have a significant history of arrests for various allegations both in Harris and Brazoria counties, according to court and jail records.

Another 1/6 rioter tipped off to the FBI by a match on Bumble.

Andrew Taake of Texas was arrested today and charged with assaulting officers with pepper spray and striking others with a metal “whip-like weapon” during the insurrection.https://t.co/mYdhhplr2s pic.twitter.com/UzfSx1TLxp