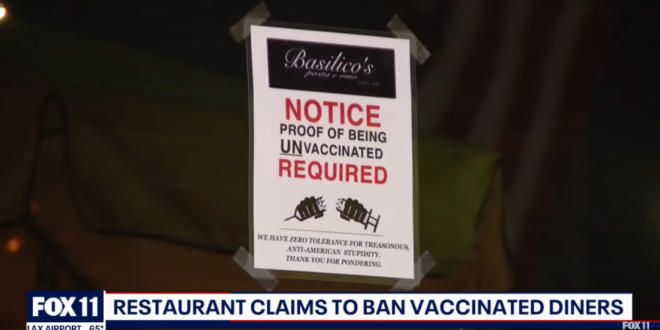 The owner of Basilico’s Pasta e Vino spoke out against a backlash on Monday, after posting flyers outside his business and on social media requiring proof that customers are not vaccinated.

The flyers read: “Notice: Proof of being unvaccinated required. We have zero tolerance for treasonous, anti-American stupidity. Thank you for pondering.”

Many people are bothered, according to reviews on Yelp. Dozens left low ratings for Basilico’s with comments like one that read: “What a slap in the face to all those who died from COVID-19.” The increased public attention led to Yelp temporarily disabling posting on the page.

Read the full article. Rather obviously, you can’t prove that you aren’t vaccinated. The diner previously flouted local mask rules and refused to close during an ordered lockdown.