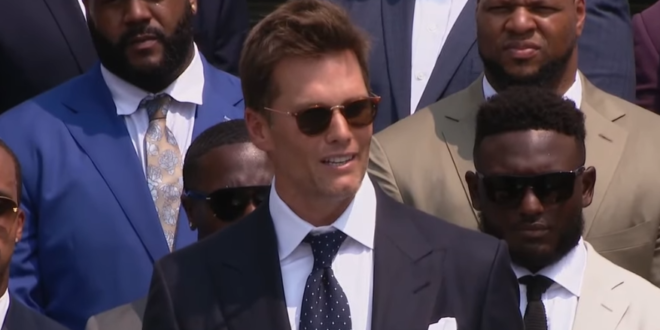 Breitbart Rages: Tom Brady Stabbed Trump In The Back

Many were surprised to see Brady make his return with President Joe Biden in office, especially considering the quarterback’s past friendship with Trump. But when Brady took it to the next level and made jokes at Trump’s expense, conservative news outlet Breitbart struggled to cope.

Breitbart published three articles in the aftermath of Brady’s comedic efforts, each with a ‘how could you?’ tone, depicting a complete meltdown from the outlet. The latter article was joined by a tweet from Breitbart’s Senior Editor Joel Pollak, who found Brady’s sense of humor to be particularly “disgusting.”

Whatever you think of Trump, watching Tom Brady stab him in the back is disgusting. The mark of a true tragic hero is that even his friends betray him. The man has sacrificed more for this country than Tom Brady — or Joe Biden, for that matter — ever will. https://t.co/HVPNnnbHi3

😆Breitbart is having a total meltdown over Tom Brady’s joke with Biden about Trump losing the election pic.twitter.com/dfhEEgSnDN

Previous Hospitalized Man: “I Thought The Vaccine Was A Hoax”
Next Hungarian PM Plans Referendum On LGBTQ Rights