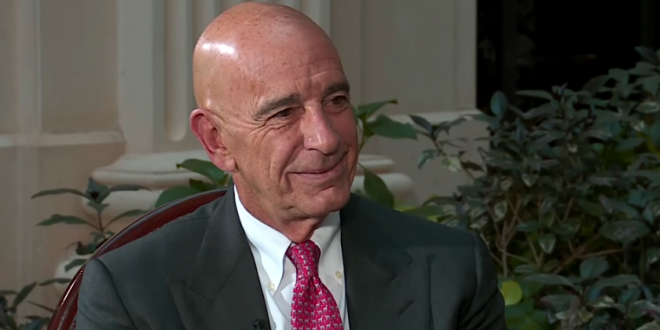 Thomas Barrack, who served as chairman of the 2017 inaugural fund for then-President Donald Trump, has been arrested on federal charges, several law enforcement officials told NBC News on Tuesday.

The charges against Barrack, which apparently are not connected to the inauguration-related fund, are expected to be unsealed soon. Barrack is a longtime friend of Trump’s.

Barrack, whose primary residence is in Los Angeles, was taken into custody in California and indicted on foreign lobbying charges related to his dealings with the United Arab Emirates, according to an indictment filed in Brooklyn federal court.

He and two other defendants are accused of acting and conspiring to act as agents of the UAE between April 2016 and April 2018. Officials also alleged that Barrack lied to FBI agents in 2019 during an interview about his dealings with the UAE.

The indictment accuses the Santa Monica, California, resident Barrack and several other defendants of unlawful efforts to advance the interests of the UAE at the direction of senior officials of that nation, “by influencing the foreign policy positions of the campaign of a candidate in the 2016 U.S. presidential election and, subsequently, the foreign policy positions of the U.S. government in the incoming administration,” the Justice Department said.

It’s not clear what he’s been charged with yet…

Trump friend and inauguration chairman Tom Barrack has been arrested on foreign lobbying charges and obstructing justice and making false statements, per DOJ release. He was arrested this morning in LA. Charges in NY. Story to come.