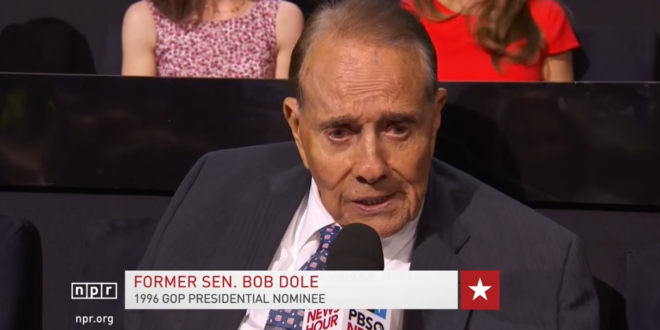 He was one of the few elders of the traditional Republican establishment to endorse Donald Trump in 2016 and the only former presidential nominee to attend the convention that nominated Trump. In a split with the 45th president, Dole said there’s no question that Trump lost his reelection race in 2020 – narrowly perhaps but fair and square.

“He lost the election, and I regret that he did, but they did,” Dole said. “He had Rudy Giuliani running all over the country, claiming fraud. He never had one bit of fraud in all those lawsuits he filed and statements he made.” “I’m a Trumper,” Dole said at one point during the conversation. But he added at another, “I’m sort of Trumped out, though.”

At 98, Bob Dole frets the nation has “lost something” re its ability to have a productive political discourse. But by endorsing and supporting Trump, he helped bring about the political environment he now bemoans. https://t.co/O681DXE3aD via @usatoday