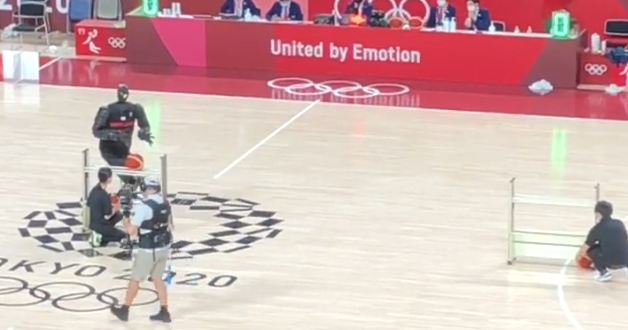 Nothing but net for Skynet! A 6′10″ basketball-playing robot sank a series of deep three-point shots and a half-court shot during halftime of the Men’s Preliminary Round Group B game between the U.S. and France on Sunday.

And the mechanical man invited plenty of comparisons to the murderous, self-aware computer system from the ”Terminator” movies that nearly wiped out humanity. “Here’s our robot overlord hitting free throws at the Olympics,” tweeted one.

Some headlines also referred to the free-throw machine as “horrifying” and “creepy.” So what is it exactly? Meet CUE, an artificial intelligence (AI) basketball robot developed by Toyota volunteers in their spare time.

Previous QAnon Rep: It’s Segregation To Require Proof Of Vax, Why Don’t They Test For AIDS Or “Staff” Infections?
Next Pompeo Prays With Wingnut Pastor For God To Forgive CA For Electing “Anti-Christ Worldview” Pelosi, Harris