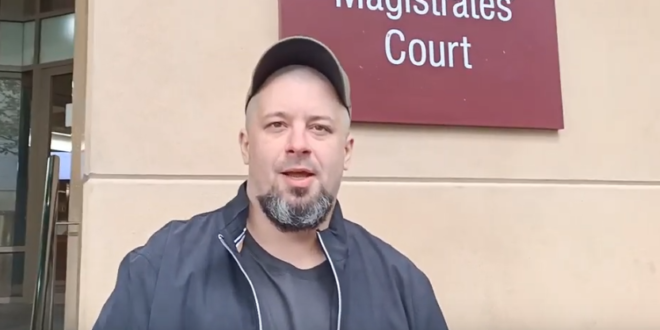 Far-right extremist Neil Erikson walked into a queer-friendly church and hurled homophobic abuse at its attendees before live-streaming the aftermath, a Victorian court has been told. Erikson on Wednesday faced an online contest mention at Melbourne Magistrates Court, seated in front of an Australian flag draped on the wall of his room. The 36-year-old has been charged with willfully disturbing a religious service run by the Metropolitan Community Church at Hawthorn.

Erikson, representing himself in court, was given the opportunity to cross-examine members of the church group he allegedly abused. One of them, Matt Pepall, told the court that Erikson, along with two women, had originally been permitted to take a seat after entering the building 15 minutes into a service. But he then stood and allegedly asked why the group “married sodomites” before using other homophobic slurs.

Erikson, who has participated in far-right riots in Melbourne, also reportedly shouted, “You’re not Christians, you’re a bunch of faggots.” The trial continues tomorrow.

In 2019, Erikson was among the extremists who assaulted Australia’s “Egg Boy,” the teenager who earned international fame after tossing an egg at far-right Sen. Fraser Anning following the anti-Muslim mass shooting in New Zealand. Egg Boy later donated the $70,000 in “reward money” to terrorism victims.

One of the thugs assaulting #eggboy is Neil Erikson who terrorized our church last year. There is a warrant for his arrest in NSW. If you see him north of the border please call police. #Auspol pic.twitter.com/aX0fQAdBJf

Good to know Neil is just as interested in our welfare as SC Travis Gray! #auspol pic.twitter.com/Ge7scjswvv

Neil Erikson held down #EggBoy after his altercation with Australian Senator Fraser Anning. He is a convicted criminal and self-proclaimed neo-Nazi. He says the New Zealand terror attack was “karma”pic.twitter.com/ypXR4QSWUg