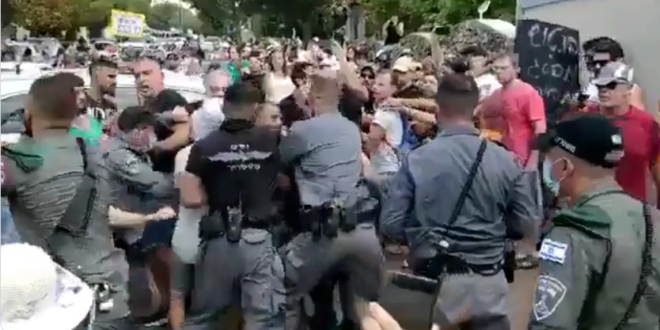 Anti-vaccination activists held an unruly protest outside the private home of Prime Minister Naftali Bennett, a day after the premier accused those refusing COVID shots of endangering the entire nation.

Dozens of protesters blocked the road and chanted slogans against Bennett, eventually managing to reach the edge of the protected zone around the prime minister’s Ra’anana home, police said.

Five people were arrested for disturbing the peace and refusing police orders as officers attempted to disperse the crowd. “The protesters made it up to the entrance of the guarded area of the home and were so close that the Shin Bet refused to allow the protest to continue,” a police official told Haaretz.

Read the full article. Bennett’s administration has banned the unvaccinated from attending most public events, “indoors or out.” The first clip below translates as “Arrest and violence of the Gestapo in front of the fascist’s house.”

This is Israel now. This is the winter that’s coming to you.

After the PM says on TV that “vaccine refusers” are a danger to everyone around them – this was only a matter of time: pic.twitter.com/AZMlIg4VdT