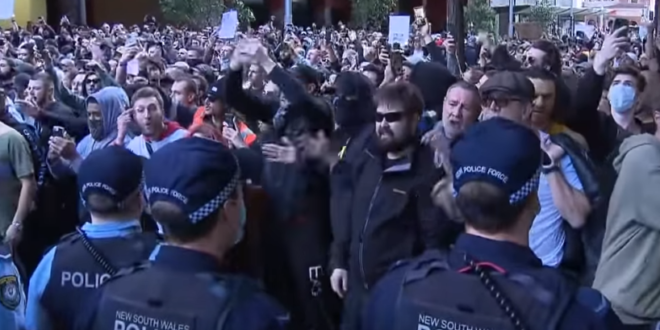 “You don’t have to be an epidemiologist to work out that if this is a superspreader event, we can forget about lifting restrictions next week,” David Elliott, the minister for police and emergency services of New South Wales, told reporters.

Officers arrested 57 people with more under investigation, facing hefty fines and penalties. There were also protests in Melbourne and Adelaide, which are under lockdowns, and in Brisbane, where there are no restrictions.

Some tweets below are from right wingers.

People are saying Enough is Enough in #Sydney.
Let your voices be heard. We’ re all fed up with governments protecting us to death. pic.twitter.com/qr5WcoQ1dq

Americans, when you watch Australian cops bashing the crap out of Aussies for exercising their right to protest, I just want to remind you that Australians are completely disarmed.

Australians can do better than mob rule.Yes the Morrison Govt has failed us all badly on vaccines. But that does not justify breaching public health ordinances like we saw today in our major cuties and creating a larger threat. We’re all in this together. https://t.co/dshMlBz8oh

The chant as maskless masses confronted police in Sydney – “you serve us.”
There’s just a touch of January 6 about all of this.#sydneyprotests pic.twitter.com/tEMTTF1Cnr

Previous Fears Rise That Bolsonaro Plans Military Takeover
Next Thousands March Against Orban At Budapest Pride, US And European Embassies Show Up To Support [VIDEO]