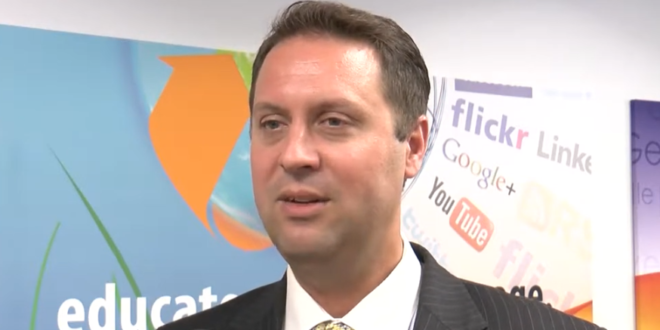 Conservative Maryland Del. Dan Cox says he is running for governor in 2022, the first right-wing, pro-Trump candidate in the race. Cox, 46, has emerged as a favorite of the wing of the Republican Party that continues to support former President Donald Trump.

Cox also helped organize buses to bring people to Washington, D.C., on Jan. 6, the day that the 2020 election was certified and a mob overran the U.S. Capitol.

That afternoon, Cox criticized then-Vice President Mike Pence, apparently for not trying to halt the tally of Electoral College votes. At 3:21 p.m., more than an hour after rioters breached the Capitol, Cox posted on Twitter: “Pence is a traitor.”

Cox is a native of Maryland and has worked as a constitutional lawyer for 15 years, according to his campaign bio. He attended Mount St. Mary’s College, graduated from the University of Maryland and received his law degree from Regent University School of Law.

According to his biography, he worked in Philadelphia as a volunteer lawyer to fight the 2020 election results. He and his wife live in Frederick and have nine children.

After Cox’s comment about Pence, Hogan called the state lawmaker, who organized buses to the “stop the steal” rally that preceded the Capitol breach, a “Q-Anon conspiracy theorist.”

As an attorney based in Emmitsburg, Cox has also played a role in a number of high-profile local cases. He represented “Jane Doe” in a lawsuit filed against Frederick County Public Schools for its transgender policy, which allows students to use whatever restroom aligns with their gender identity.

He also represented Daniel Sullivan, an officer with the Frederick Police Department, who sued the agency for alleged discrimination after he held a “Blue Lives Matter” rally in July 2016.

Cox is a member of Alliance Defending Freedom, a Christian legal advocacy and training group that supports religious liberty legislation across the country.

Dan Cox, who is now apparently running for Governor of Maryland, is one of the 6 known QAnon-connected incumbent state legislators currently serving nationally. https://t.co/TRdd6KIVhQ pic.twitter.com/O6iqUIKbm1

Maryland’s gubernatorial race has its first pro-Trump candidate. Dan Cox, a Republican state delegate, announced that he is running for governor in 2022. https://t.co/RzLk3sU4eT

Dan Cox bussed insurrectionists to the January 6th Capitol attack. If this is what their gubernatorial candidates look like, the @MDGOP has truly hit rock bottom. https://t.co/GhGyHUZibB

Previous CHATTER AWAY: Overnight Open Thread
Next QAnon Rep. Lauren Boebert: It’s Not A Coincidence That July 4th Was A Sunday This Year, God Is On The Throne