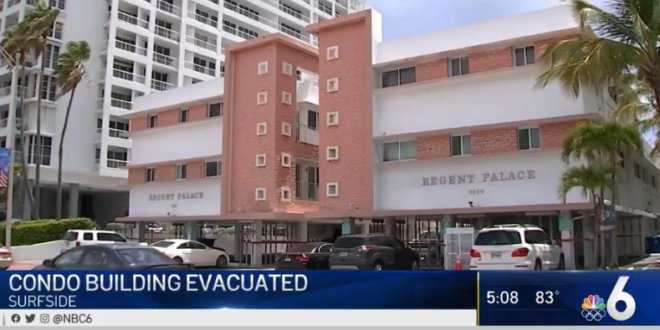 It’s time to go. Everyone who lives at the Regent Palace condominium saw the destruction at Champlain Towers, less than six blocks away, and they don’t need to be forced out. They’re leaving or they’ve already left, voluntarily.

The building was constructed 70 years ago on the beach at 93rd and Collins. The residents hired their own engineering firm to inspect the property, before the Champlain Towers collapse, and the report came back a couple of weeks ago showing severe issues.

The Town of Surfside’s building department sent the Regent Palace condominium association a letter saying immediate action was needed. In boldface font, the email said in part, “Place shoring around all damaged columns, do not wait for building permits to do so, it is imperative that you act immediately without delay.”

Just a few blocks from the Champlain Towers site, another condo building is deemed unsafe and the residents aren’t taking chances, they’re moving out. Story at 5 on @nbc6. pic.twitter.com/vJWvFf8qmI

Previous Federal Judge Forces Capitol Rioter To Unlock Laptop To Access Riot Footage From His Helmet-Worn Camera
Next Hospitalized Man Says He’ll Go Through It All Again And Won’t Get Vaccine: “Don’t Shove It Down My Throat”