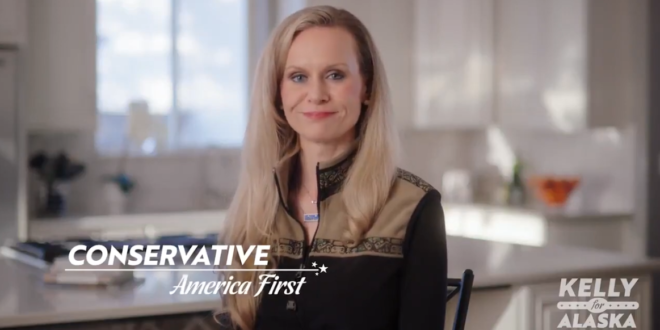 The Alaska Republican State Central Committee on Saturday endorsed Kelly Tshibaka in the 2022 race for the U.S. Senate seat currently held by Republican Lisa Murkowski. The committee approved Tshibaka’s endorsement in a 58-17 vote during a meeting in Fairbanks.

Trump endorsed Tshibaka last month, calling her “MAGA all the way.” Trump said in a statement at the time that he would campaign for Tshibaka in Alaska.

“We now move forward with a united front, determined to defend Alaska from the continued onslaught of the radical Biden administration,” Tshibaka said in the statement Saturday.

Kelly Tshibaka, a Republican Senate candidate seeking to challenge Alaska Sen. Lisa Murkowski in 2022, once wrote in support of an “ex-gay” Christian organization that promoted discredited “conversion therapy” and said that homosexuality was caused by “sexual molestation during childhood.”

In an article unearthed by CNN’s KFile, Tshibaka wrote that gay people can “work through the process of coming out of homosexuality” through Christianity and urged gay people to “not be controlled by the ‘once-gay-always-gay’ rhetoric used to advance political agendas” in a 2001 Harvard Law School student newspaper article.

Lisa Murkowski primary challenger wrote in support of ‘ex-gay’ organization and posts on evils of ‘addictive’ witchcraft and ‘Twilight’ moviehttps://t.co/aYEbHma0w3