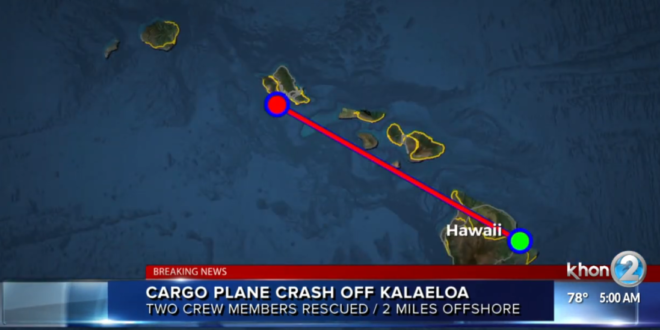 A cargo plane crashed off Hawaii on Friday morning with two people on board. The state Department of Transportation confirmed the crash happened 2 miles off the coast near Kalaeloa Airport. According to CNBC, both crew members were rescued after making a belly landing in the ocean after attempting to return to the airport due to engine trouble. The U.S. Coast Guard and the Honolulu Fire Department are responding.

Crew of a cargo Boeing 737 have been rescued after making a belly landing in the ocean as they attempted to return to Honolulu due to engine trouble. Cargo plane operated as Transair per FAA. FAA and NTSB investigating.

A 737-200 cargo aircraft operated for Transair by Rhoades Aviation made an emergency landing in the water near Honolulu after reportedly suffering engine trouble. The FAA reports that both crew members have been rescued. ADS-B data is available at https://t.co/lsdJ4WlkHy pic.twitter.com/8D71tEQ3wy