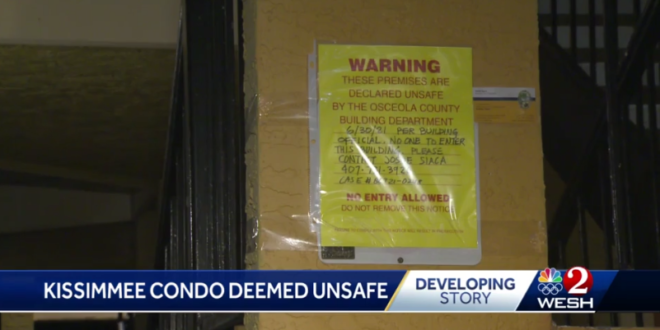 On Wednesday morning, county officials declared buildings housing 72 units at Images Condominiums unsafe after an engineering firm discovered several walkways leading to the units are “in danger of collapse” and posed a safety concern during an inspection, Osceola County spokesperson Chris Brumbaugh said.

Residents were advised to enter the buildings containing the units at their own risk, he said. The complex, located off of West Osceola Parkway and U.S. 192 in Kissimmee, was built in 1990, property records show.

Osceola County staff and partners were at the condominiums offering residents assistance with temporary housing Wednesday, and staff will also be at the complex offering assistance Thursday, Brumbaugh said.

The walkway of a building at Images Condos in Kissimmee is propped up with 2x4s. Osceola County says building is unsafe, and walkway could collapse. 72 units affected #WESH pic.twitter.com/BjebhLwxl8