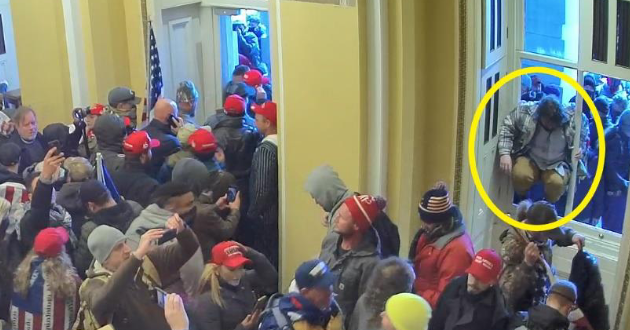 A Brooklyn plumber with a short-lived political career was busted Wednesday for climbing though a U.S. Capitol building window to join fellow rioters in the Jan. 6 insurrection — with photos showing the bearded suspect amidst the crazed crowd inside the federal landmark.

Daniel Christmann, 38, was arrested at his home on federal charges after a pair of tipsters identified him to investigators, according to court documents.

Chirstmann, who mounted an unsuccessful run for a state senate seat in 2020, was then spotted on surveillance video reviewed by an agent with the FBI’s New York Joint Terrorism Task Force, according to an 18-page Brooklyn Federal Court complaint.

A Brooklyn plumber, one-time state senate candidate, is busted for climbing though a U.S. Capitol building window to join rioters on Jan. 6 — with photos showing the bearded man amidst the crazed crowd inside

Daniel Christmann, 38, was arrested at homehttps://t.co/9RqYzHgX3J

Daniel Christmann, who’d previously run for seat in New York state Senate (per feds), is accused of being amid the mob near Capitol door on Jan 6 and of acknowledging his role in breach on Instagram

Daniel Christmann, a New York plumber and former political candidate, has been charged for storming the Capitol on Jan. 6.

New Jan 6 arrest: This morning the FBI arrested Daniel Christmann, 38, at his residence in Brooklyn in connection with the Capitol riot. He’s a plumber and previously ran for a NY senate seat. He streamed his time inside the Capitol on his Instagram account; CCTV also caught him. pic.twitter.com/4M4Onj3Wdy

Daniel Christmann, below, is the person who ran against me in the general election last year. 😐 https://t.co/69GYuDrkbD

Feds say he was allegedly photographed climbing through a Capitol window. pic.twitter.com/S8Utu5AODb