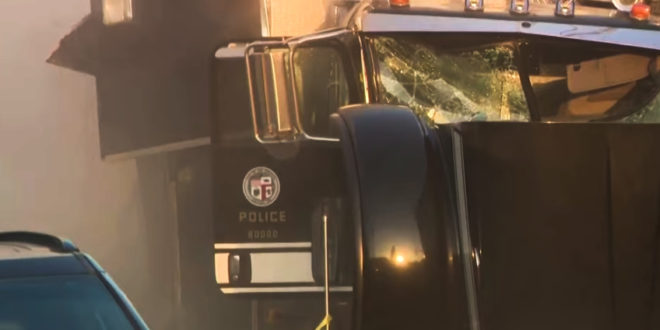 Sixteen people were injured Wednesday evening after a planned detonation of seized illegal fireworks ended in an explosion in South Los Angeles.

There were also six civilians, three with serious injuries and three with minor injuries, taken to area hospitals. Names, genders and ages of the injured were not immediately released.

Read the full article. That first YouTube clip below. WHOA.

Our Bomb Squad officers were in the process of seizing over 5,000 pounds of illegal fireworks in the area of 27th Street and San Pedro. Some of the fireworks were being stored in our Bomb Squad trailer as a precautionary measure. Unknown at this time what caused an explosion.

WATCH: Sky9 was overhead when police attempted to detonate a stash of illegal fireworks that ended in an explosion in the 700 block of East 27th Street in South L.A. https://t.co/KpWiAEoyqv pic.twitter.com/UbIXLDoZjh

I am closely monitoring the situation at 27th and San Pedro and am deeply concerned for those who were injured. @LAPDHQ and our Crisis Response Team continue to survey the neighborhood for more injuries and make sure the area is safe.

I’ve directed the LAPD to conduct a full investigation into this incident, so we can better understand why this happened.

Illegal fireworks pose a great danger and can cost lives. We will prosecute those who use or possess them to the fullest extent of the law.