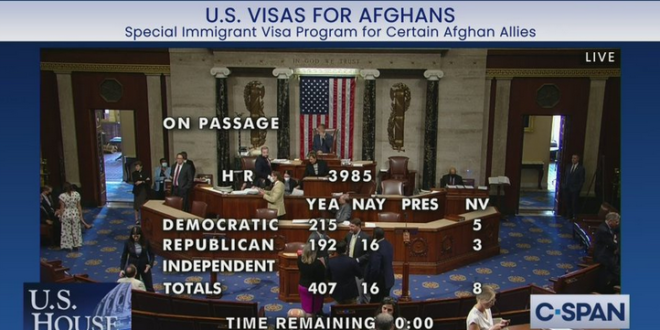 The House voted overwhelmingly on Thursday to expand a visa program for Afghans who are facing retribution for helping American troops and diplomats during the 20-year war in Afghanistan, moving to allow more of them to immigrate to the United States quickly as the Biden administration races to evacuate them.

With Afghans who helped the U.S. personnel now facing threats from the Taliban as American troops withdraw, a broad bipartisan coalition in Congress — led by military veterans who have worked alongside interpreters or fixers in combat zones themselves — has raced to give the administration wider latitude to airlift them to safety.

407-16: House passes bill to expedite Afghan Special Immigrant Visa process for Afghan interpreters, contractors & security personnel who worked w/US gov’t in Afghanistan to help them immigrate to the US as the US withdraws troops from that country.Allies Act now heads to Senate. pic.twitter.com/l4rSflrgfW

Previous Johnson: “I May Not Be The Best Candidate” In 2022
Next Mississippi Petitions SCOTUS To Overturn Roe V Wade