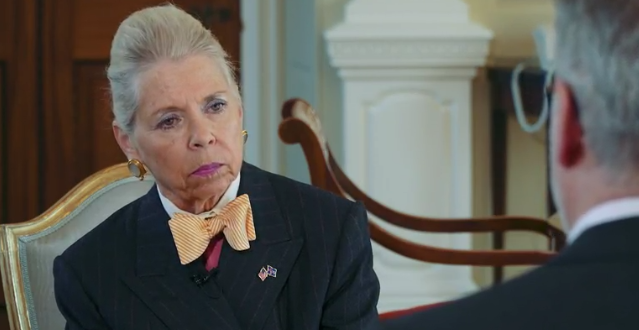 According to the conspiracy theory known as “Italygate,” people working for the Italian defense contractor, in coordination with senior CIA officials, used military satellites to switch votes from Trump to Joe Biden and swing the result of the election.

Though her name was not mentioned in either document, both Virginia organizations are led by Michele Roosevelt Edwards, according to state corporate filings reviewed by The Washington Post.

The Institute for Good Governance’s registered headquarters since late last year has been the historical North Wales Farm, a 22-bedroom mansion in Warrenton, Va., state records show. The property is listed for sale at just under $30 million.

The Post found that Edwards had developed a string of lies in recent years, including another one of her companies releasing a statement from an Italian lawyer pushing the unfounded theory.

Her most outlandish, though, came from a video interview in which she gave a tour of a home worth about $30 million she claimed was hers.

The home is actually owned by a company formed by David B. Ford and is currently on the market. Ford’s widow denied Edwards lived at or owned the home. Edwards declined to comment to The Post.

As was reported last week, former White House chief of staff Mark Meadows pressured Trump’s DOJ to investigate “Italygate” based on a YouTube video he had seen. Jim Jordan then became enraged at news of the refusal. Watch the clip. Read the full WaPo piece.