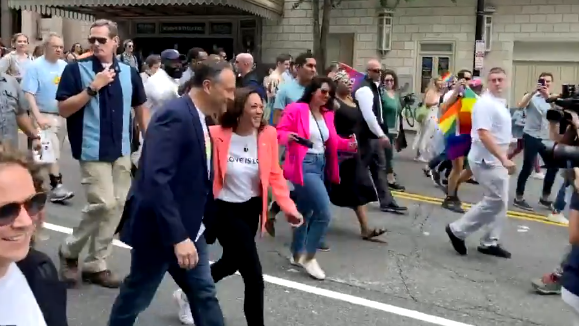 Vice President Kamala Harris put her pride for the LBGTQ+ community on display Saturday in Washington, D.C. Harris surprised marchers by joining the Capital Pride Walk and Rally. She wore a pink blazer and a “love is love” shirt and walked with the procession for about a block.

“Happy Pride,” Harris told members of the crowd as she waved to people cheering on sidewalks. Second Gentleman Doug Emhoff, wearing a t-shirt with rainbow lettering, joined Harris and the other marchers headed toward the Capital Pride rally at Freedom Plaza.

In brief remarks, Harris called for the passage of the Equality Act and said the Biden administration understands the importance of advancing LGBTQ+ rights.

Just In: Vice President Kamala Harris joined an LGBTQ+ pride march in D.C. She waved to the crowd and said she’s committed to advancing protections for the transgender community. #PrideMonth https://t.co/UPa3f0SyY9

After stopping by the DC Pride parade the @VP & @SecondGentleman bumped into a bride & groom, and some adorable kids on this beautiful Saturday afternoon! pic.twitter.com/M6R5GcgDXS

.@VP and the second gent at DC #Pride 🥰 pic.twitter.com/h5vK9khRb4