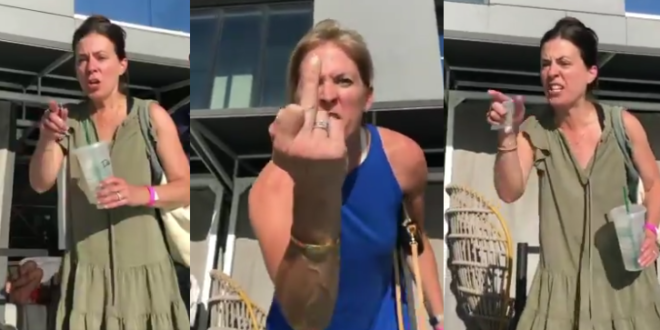 A relaxing day at the pool took an ugly turn. A heated argument caught on camera started when two women claim they were harassed for kissing each other at the Kimpton Sawyer pool. Domonique Veasley tells me the encounter took her by surprise. She believes if she were straight, this wouldn’t have happened.

“This is not okay anymore, it’s 2021,” explained Veasley. Despite straight couples showing the same level of affection, she says they were the only ones approached. She believes the group eventually called security on the couple.

“It’s exhausting but I also felt very supportive from the other people at the pool,” explained Veasley. “It gave me faith for the future and it showed me that it’s going to take a long time, it’s a long road, but it’s a spark of faith.”

Read the full article. There’s much more, including supportive statements from strangers who were there, the reaction of hotel management, and a message from the local LGBT group. See Veasley’s interview in the second clip below.

Pride month begins with this from @Theblackbayarea IG. The White women at this Sacramento hotel pool were pissed that a Queer Black woman was kissing her gf in public because there were children present. They were shamed out. This is a #280charactersaintenough moment! Just damn! pic.twitter.com/OVDmVkWhMz