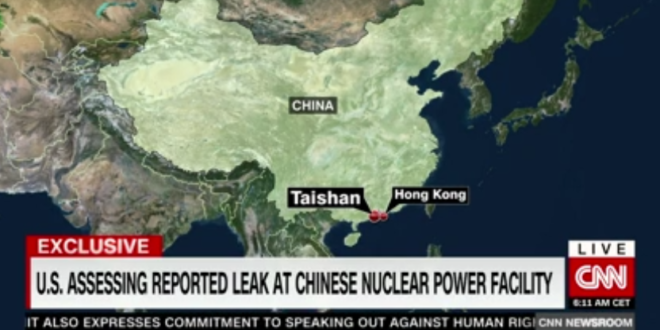 The US government has spent the past week assessing a report of a leak at a Chinese nuclear power plant, after a French company that part owns and helps operate it warned of an “imminent radiological threat,” according to US officials and documents reviewed by CNN.

The warning included an accusation that the Chinese safety authority was raising the acceptable limits for radiation detection outside the Taishan Nuclear Power Plant in Guangdong province in order to avoid having to shut it down, according to a letter from the French company to the US Department of Energy obtained by CNN.

Despite the alarming notification from Framatome, the French company, the Biden administration believes the facility is not yet at a “crisis level,” one of the sources said.

China’s Taishan Nuclear Power Plant said accusations of dangerous levels of radiation leakage at the facility were untrue, claiming on Sunday that its two reactors “met the requirements of nuclear safety” and were operating normally.

“Recently there have been some agencies and media organizations paying attention to and inquiring into the situation at the Taishan Nuclear Power Plant,” the plant said in a statement on its website Sunday evening, before the CNN report was published.

“All operating indicators of the two units have met the requirements of nuclear safety regulations and technical requirements for power plants,” it said.

US officials are assessing a report of a leak at a Chinese nuclear power plant but don’t yet think the facility is at crisis level, US sources say https://t.co/3LTdJrz8hl